All you need to know about Lagos
Knowlagos
Places
Comments

Office of the Public Defender (OPD), Lagos State Ministry of Justice was established on July 24th, 2000 by the former gorvernor His Excellency Asiwaju Bola Ahmed Tinubu, to provide free and qualitative legal services to the indigent and oppressed residents of the state.

The main objective for the establishment of the OPD was to create an avenue; a forum that will be open to receive and legally deal with issues that affect the socio-economic rights of the indigent residents of Lagos State irrespective of tribal background and emphasis “was and is” on the “RIGHTS OF THE DISADVANTAGED IN LAGOS STATE”.

They have the vision to safeguard the fundamental human rights and freedom of the vulnerable and disadvantaged groups through a strong, vibrant and high-quality pro bono service in collaboration with stakeholders, nationally and internationally.

Their Mission Statement is to provide quality legal aid through free representation in court and legal advice to promote respect for rights and freedoms, the law and constitution and to ensure that all persons resident in Lagos State irrespective of means, sex, tribe or religion have access to justice. 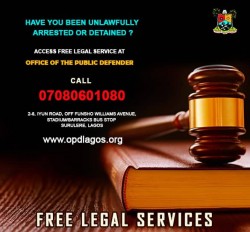